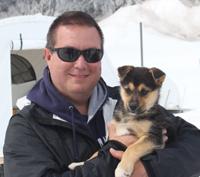 Joe Byrnes, of Byrnes Electric, Inc. (BEI), is a member of the BNI Networker’s Choice Chapter. His skills are not only needed for his regular customers, but also for those who are not as fortunate. Here’s the story:

Joe was approached by a general contractor that he often works with, Kevin Dorlon of All Seasons Contracting, who was asked to put together a crew of contractors, sub-contractors, and suppliers for an episode of George to the Rescue, an NBC show where host George Oliphant finds a family in need and helps them rebuild or refurbish a room in their home.

The family Joe helped consisted of a father who is a retired sheriff’s officer, and a working mom.  They have three children, one of whom is partially disabled.  They also enjoy rescuing dogs. They needed more space for the family and animals.

Joe noted that the home was not in the greatest of condition and they had a room that was pretty much unusable. The plan was to take that room and to rebuild it into a comfortable living space for all, as well as make several other improvements throughout the rest of the home.

“I really enjoyed the experience,” Joe said. “Even though BEI didn’t receive much air time, it was well worth it.  I have actually became quite friendly with George, and he often recommends BEI for electrical projects throughout his community.”

You can go on the George to the Rescue website to view the episode, A Home for Rescue Dogs, which originally aired October 31, 2015.